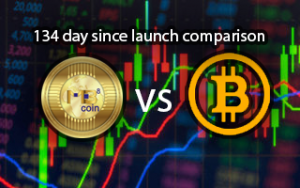 I have taken the price of MB8 Coin everyday from Coin Market Cap for 134 days and compared it to that of BTC from when it began to be tracked in 2013 on Coin Market Cap. The results haven’t been tampered with and you can verify the information yourself at https://docs.google.com/spreadsheets/d/1KDaMF5kSZMb_Vl0x1ETJpq9LavoasK2MS0gazQ9BNW8

Baring in mind that when BTC was first launched it was a one of a kind and had no competitors as such, now with 4,991 reported cryptocurrencies on CMC MB8 coin is progressing along quite well in comparison.

Join the discussion at https://t.me/mb8coin

Any cookies that may not be particularly necessary for the website to function and is used specifically to collect user personal data via analytics, ads, other embedded contents are termed as non-necessary cookies. It is mandatory to procure user consent prior to running these cookies on your website.